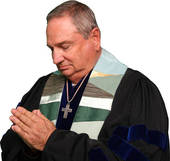 I arrived home yesterday evening to find my copy of the latest United Methodist Reporter and read of the Texas Annual Conference’s consideration to discourage ordination by potential clergy candidates over the age of 45.  As you might imagine, this proposal has struck a nerve.  I may be weighing in too late, but, hey, I’m trying to be a blogger, so here goes.

According to the UM Reporter, the proposal does not ban older candidates.  In other words, they’re not trying to get rid of older people serving in ministry.  It just discourages them from going through the full ordination process.  These are a few of the details they appear to be considering:

Various conference officials stress that they are by no means denying someone’s call, but rather are attempting to deal appropriately with the annual conference’s long-term needs, in view of the time and monetary investments necessary (by both conference and candidates) to complete the process.  On the other side of the debate are people saying what a bad idea this is and that it is tantamount to age discrimination, against the law and the Book of Discipline.

A few of my own scattered observations:

As Kevin Watson has recently pointed out (vitalpiety.com), ordination is not a right, but a rite of the church, a calling and something that the church discerns with the one called.  As a matter of general principle, then, annual conferences not only have the authority, but also the responsibility to make strategic decisions about candidates’ suitability.  None of us likes being told “no,” but sometimes “no” is the right answer.

On the other hand, who will serve the many UM congregations that it seems only these older clergy will serve?  Generally (and I emphasize that word), younger people are not as willing to go to low income, lonely (for young people), often rural, appointments.  Our younger generations have been schooled in group forms of collaborative education.  They are more comfortable with team efforts.  Young people also think of and engage their social lives differently than us older folk.  They’re much more likely to do social things in groups (yes, like Friends or Big Bang Theory).  While statistics show that young people hunger for and appreciate interaction with older generations, they still need age peers.  To put a young seminary graduate in a place where there are no other young people around for miles can feel to them like being consigned to the outer darkness.

Again, who’s going to serve the under-served and under-resourced and aging parishes?  Often older candidates.  Out of sheer love for God and the call, they’ll go to that low income isolated parish.  I can imagine someone from the Texas Conference saying to me, “That’s exactly what the licensed local pastor track is for.”  And that person would be right.  But I wonder about the increasing appointment stratification that would seem to happen inevitably.  Yes, it happens already in other ways, but I think the move the Texas Conference is considering will add levels.

Which brings me to the (at least) two-tier ministry we have going right now.  For a very long time – partly because my Dad was a Course of Study graduate who served small rural parishes and partly because I have taught some really gifted people in the Course of Study – I have been troubled by the clerical class system in United Methodism.  I won’t chase this rabbit now, but the sometimes open disdain by elders for licensed local pastors is shocking and disheartening.  As long as we have the delivery systems in place for theological education that we have now, we will continue to endure this problem.  And it is a problem.

Even though the proposal does not intend to deny anyone’s calling, it surely will have a dampening effect on older folk going into the ministry.  It is almost impossible for people in this age group not to hear, “We don’t really want you.”

Worse, this proposal – driven as it is by a version of supply-and-demand – also seems to predict the future.  First the economic model.  As I noted above, conferences rightly must think carefully about the investment of resources.  If we think just in essentially economic terms, we’re looking at cycling older folk through the system at a much more rapid rate than younger clergy, which means that the church is investing significantly more resources in a person compared to the return relative to length of service.  The church also constantly has to “reload.”  Younger clergy, all other things being equal, have longer to serve.  It makes sense to invest in them.  There’s simply more bang for the buck, most likely.

And here is the problem.  Isn’t this the kind of economic model that we tend to decry in other quarters?

Now my point about predicting the future – and this thought looms very large in my own mind as deeply important – I can tell you about a friend who, after a long and distinguished career as a high school teacher, entered seminary in his 50s.  He has had a very significant ministry, including (take note!) nurturing the call of a number of people who entered the ranks of clergy themselves.  John  and I knew each other in seminary.  I was young and green.  I learned a lot just from talking to him in our dorm rooms after classes and over the years as clergy colleagues.

This real-life example illustrates both the metrics and the intangibles of the problem of making age an issue.  An older clergy  person may help many young people (as did John) hear a call and enter ministry.  The church, by putting a damper on the possibilities of that person serving as an elder in the church, maybe effect the supply of pastors in unintended, but no less tragic, ways.  Furthermore, had the Texas Conference policy been in place, it is exceedingly unlikely that John would have gone to the United Methodist seminary that we both attended, and my life would have been poorer by a magnitude.

Finally, an obvious point, but one I cannot resist making.  Choking the pipeline to ordination for older clergy will not cause a larger influx of younger clergy candidates.  I’m confident that the Texas Conference knows this.  They have some really good things going for young people in their conference, so the likelihood is that they won’t have to worry as much as other conferences about recruiting young candidates.  But for the other reasons I’ve named, I have to admit (now that I’ve thought “out loud” with you) that I’m worried by the implications of the move that those darn Texans seem to be making.

Aiming at the Right Target

All in all, then, I must say, I think the Texas Conference move is a bad idea.  I appreciate the difficult problem they face and that the whole church faces.  This is not an easy thing to solve, so I’m by no means casting aspersions.  Still, I think we need to trust God to call the people whom God wants to call, trust our boards of ordained ministry to oversee the candidacy process to discern gifts and fitness for ministry (and no more) and trust the Spirit to send us the candidates we need.

And for the rest of us, let’s focus on the fundamental problem.  We United Methodists are not doing a very good job at nurturing the faith of our young people.  We are not effectively catechizing them.  Therefore, we have fewer young candidates for ministry than we need.  Older candidates are not the problem.  The lack of younger candidates is the problem.

14 thoughts on “Choking the Pipeline for Older Clergy Candidates: The Larger Problem”