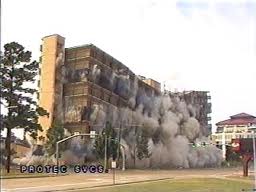 I just finished teaching in the certification class at Perkins School of Youth Ministry (http://www.smu.edu/Perkins/PublicPrograms/PSYM%202013).  To the whole group last Monday and to the class members throughout the week, I said several hard things about the future.

One of the hard things I said was, “The United Methodist Church is imploding.”  Two qualifying statements as I start:

1.  We normally think of an implosion happening very quickly, like a building wired with dynamite to drop vertically into a heap in a matter of seconds.  Obviously, United Methodism’s demise is taking place far more slowly.  But if we could watch a building’s implosion at the rate of a frame a second, we might be able to imagine…

2.  I honestly feel bad – even disloyal – making such gloomy claims, because I truly admire denominational leaders who are working as hard and as smart as they can to help us adjust – bishops and agency executives and directors.  They love Jesus, the church and our mission.  They are intelligent, committed disciples.  Not one thing I say in this post suggests anything but utmost respect for their courageous efforts.  I am not aiming a veiled criticism at any one person.  I am trying to focus on the big picture, recognizing that  within that big picture I can find beautiful exceptions to the trend.

In spite of worthy efforts, our church still suffers a discouraging inertia.  There is something eerily mystifying about how hard people work and how little we accomplish.  And when it comes to young people, we continue to make glaring mistakes.  In a subsequent post, I’ll get to some specifics on that point.  For example, I’ll talk about the treatment young candidates get from far too many committees and boards of ordained ministry.

But that’s for later.  Right now, I want to name our lack of imagination.  Remember Ray Stevens’ lyric: “There is none so blind as he [sic] who will not see.”

Even though we talk as if we recognize the prospect of complete collapse, for too many of us seem unable to imagine it actually happening.  A future without a United Methodist Church?  Really?  Back in the day, I’m sure a lot of people thought the Southwest Conference (I am in Texas, after all) would be around as long as there was college football.  Whether we openly state it or not, we seem to think that the UM Church exists by metaphysical necessity.  It does not.  It exists by the will of God and the faithful witness of God’s people.

Bill Cosby, as Dr. Huxtable, was known to say to his TV children, “I brought you into this world and I can take you out.”  It was funny.  We could laugh because we knew he wouldn’t do it.  Obviously, I don’t intend to press this analogy very far, but what if we realized that God can, and might, and maybe has – at least for a time – removed the glory from us?  Are we Ichabod?  Maybe God is taking us out a little bit at a time, through our own intellectual and moral turpitude.

The disappearance of a church has happened before, and in large-scale ways.  Philip Jenkins’ book, The Lost History of Christianity: The Thousand-Year Golden Age of the Church in the Middle East, Africa and Asia–and How It Died, (HarperOne, reprinted in 2009), is a very instructive read.  He chronicles the death of the once and thriving church in places like North Africa (home of St. Augustine) and Iraq.  There, the church has essentially disappeared.

We must grapple with the distinct possibility that the same thing could happen in the United States.  Not tomorrow.  Not next year.  But over time.  Yes, Robert Putnam (American Grace) and others remind us that Americans are still by comparison exceedingly religious, even Christian.  And yes, even with the increasing number of “nones.”  Yes, I know all that.  But what direction are we (still) headed?  And what does it mean for The United Methodist Church?

As a number of our leaders have pointed out, within ten years at least half of our clergy leaders will retire or reach retirement age.  Financially, we have all but exhausted our reserves.  We have reached our limits.  Institutionally, we are dying.

That is our future.  Unless we change.  Modifying structures is necessary.  God bless the leaders who are paying attention to this challenge.  But vastly far more is needed than fixing structures.  We need a new vision.   And it must include young people far more organically and enthusiastically than it does at the moment.  Stay tuned.

16 thoughts on “The United Methodist Church is Imploding”