With everything in me, I don’t want to write this post.  But given the Chik-Fil-A controversy and, more broadly, the constant attention to same-sex-related topics in the news, on Facebook, and basically everywhere I turn in daily life, I feel I must.  Fair warning: there is more heat in this post than I’d like.  And my words won’t be as “worked out” as I’d like.  But I am pleading for a little bit of sanity and charity.  So I’m sticking my neck out and my nose in. 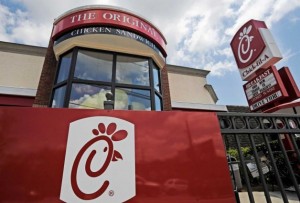 To try to keep the aim of my post in focus, let me lay down a couple of qualifications.  Right now, my attention is on the so-called progressive anger at Chik-Fil-A and at the unwise, unguarded and foolish statements of people like Rahm Emanuel.  I want anyone who might wonder about my intentions, however, to understand that I’m not any happier with the way the conservative culture warriors go at this issue, either.  When First Baptist Church, Dallas, puts “Gay is not OK” on the sign out in front of their building, they are contributing to the problem rather than the solution.  They made a political statement, not a pastoral one.  It was a slogan, a sound bite.  I’m not saying that people at First Baptist are horrible, awful people.  They are my brothers and sisters in Christ.  I’m just trying to say that putting a slogan on a church sign on such a sensitive topic is a foolish and clumsy and potentially (at the very least) cruel way of operating.

But as I said, I’m more concerned at this moment with the either-or thinking that attends the Chik-Fil-A controversy.  Apparently, we -the public – have two options.  We can either get on board with full, unqualified approval of same-sex activity, including and especially gay marriage or we can be smoked out into the bright light of day as the bigots and haters that we evidently are.

Are these my only options?  Really?  Don’t make me make that choice.

Please don’t set up the false dichotomy, the “either-or” of unreserved approval or unqualified condemnation.  These are not the only two choices.

The truth is, most of us don’t know exactly what we think about same sex attraction, sexual identity, same sex marriage and any other of the numerous related topics.  We have opinions, yes, but we’re not 100% sure of our opinions.  Most people just want to get along, be good neighbors.  Most people don’t want anyone to suffer.  We want people to lead good and productive lives.  Gay, bi-, trans-, straight, whoever.   We can’t stand slurs, sick jokes, or bullying.  Whatever we think about moral questions and policy matters, we want peaceful relations and fairness for all.  Our hearts are torn.  We have opinions and we know those opinions in some ways “go against” people we love.

If you call yourself a progressive and you simply cannot possibly understand why anyone like a Dan Cathy (or me) might think the way he does, then instead of calling for his head, listen.  You may think you have science and rationality on your side.  And you may.  You may think that you understand civil and human rights better than the rest of us.  And you may.  But you also may not. You may not know everything there is to know about sexuality.  Or morality.  Or how to think about them.  You might actually learn something by listening to your opponents.  (I know, conservatives need to do the same thing.  But stay on point here for a minute.)  It’s time for a little epistemic humility from the progressives – the noisy ones, at least.

I deplore and repudiate hatred toward anyone.  But I also do not believe that the only compassionate conclusion regarding same sex activity is unqualified approval.  That very thought puts me at ideological odds with people whom I love deeply, closely.  But don’t you dare say that I’m homophobic, or that I’m guilty of bad motive, or that I’m just not well-informed enough.

One thought on “Don’t Make Me Make that Choice”