This is one in a series of Lenten reflections at Patheos on the men and women who became the “shouting stones” for Jesus on his way to the Cross. How do the actions of these everyday folk invite us in our Lenten journeys? In this reflection, I was asked to reflect on the woman who anoints Jesus for his burial.

She Has Done a Beautiful Thing 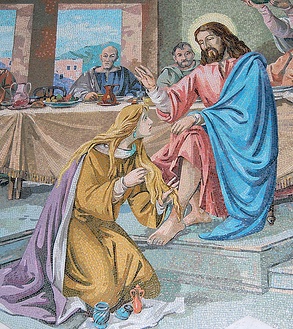 It is so easy to lock in on Jesus’ words, “The poor you will always have with you,” and miss the impact of this scene. A woman barges into a meal and does what, by all practical intents and purposes, looks like a completely wasteful and useless act. She breaks a beautiful alabaster bottle and dumps rare and expensive perfumed ointment on Jesus’ head. Those present for the mea

l complain, but Jesus praises her and tells us why: “She has done a beautiful thing . . . she has anointed my body beforehand for burying.”

pels, but this one does. Maybe it is because Jesus said that wherever the Gospel is preached, this woman’s ac

t of loving service would be told the world over. Whatever the reason, it stands for us as a challenge, with two questions for faith: Are we paying attention? What is the quality of our love?

Nard was a rare perfume, produced in far away Nepal and carried overland or by sea to the Middle East. The alarm over how the woman used it was, in an economic sense, understandable. An item worth three hundred denarii would take six months’ wages for the average worker to buy. And since the average worker would have to use a significant amount of each day’s wages for food, clothing, and shelter, a woman would have taken considerably longer to save this amount. To dump it all on Jesus in such a profligate way would have seemed, to a sensible person, a completely absurd and offensive act. And to break an alabaster jar, a costly item in itself, no doubt added fuel to the fire.

Not to mention that this woman had already offended sensibilities, most likely, by showing up to the meal at all. So, as is often the case with scenes from Jesus’ life in the scriptures, everything about this one is all wrong according to conventional thinking, which is precisely why it is so powerful in stimulating us to think.

I cannot resist importing bits of how the other Gospels tell the story. Mark tells us that this woman poured the nard on Jesus’ head. Luke and John say that, weeping, she wets Jesus’ feet with her tears, anoints his feet with the nard, then wipes his feet with her hair. (No self-respecting woman would have let her hair down in public like that.) Whether we take these texts compositely or look at each individually, she has acted shamelessly, extremely, begging us to see what she sees.

First, we see in her actions the burden of anticipatory grief. Jesus tells us that this

woman is preparing his body for burial. The contrast with those gathered at the meal, presumably many of Jesus’ disciples (Matthew’s gospel makes reference to them), could not be more stark. She sees what is coming. They do not, even though Jesus has told Peter and the others three times that he was on his way to Jerusalem to die.

Seeing what is coming, the woman expresses her love for Jesus in the most extravagant way. It’s all in how you frame it. If it’s just a meal we’re looking at, then her actions make no sense. But if it’s Jesus’ supreme act of redemptive love, enacted through the cross, then the costliness and the shamelessness of her act of love is perfectly appropriate. She has done a beautiful thing for Jesus.

Hence the two challenging questions. Are we paying attention? Had we been standing where this woman was standing, could we have seen what she saw, what was coming for Jesus? Would we have been as “dialed in” as this woman was to the significance of the events unfolding before her eyes?

And what is the quality of our love? Are we stingy with it? Do we dole it out in little bits and snatches? Or do we just dump it, lavishly, extravagantly, shamelessly, offering to God and neighbor the love with which God loves us?

It was a risky, controversial thing this woman did, but it was a beautiful thing. As

we journey forward in Lent, may this woman’s witness provoke us to love and good deeds in the name of our Lord.

This is one in a series of Lenten reflections at Patheos on the men and women who became the “shouting stones” for Jesus on his way to the Cross. How do the actions of these everyday folk invite us in our Lenten journeys?