Most every morning while we are readying for the new day, my spouse and I keep 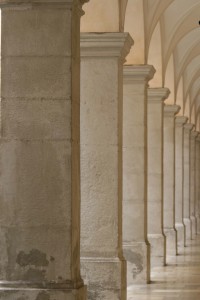 one eye on either CNN or Headline News.  Yesterday, the stand-in for Robin Meade (I can’t remember her name) made reference to Nancy Grace’s investigation of the Las Vegas showgirl who has turned up missing.  And I began to think…

I admit, I don’t watch Nancy Grace, though I’ve seen her interviewed and caught bits and snatches of her program as I channel surf.  I want to believe her Intrepid Crusader persona and I’m sure she is sincere, yet the perpetual diatribe and the hysterical (or conspiratorial) tone wear thin quickly.  The steady stream of crimes, victims, police or lawyer incompetence, brutality or veniality gives them a fauxtragic quality that leave me alternately unmoved and sickened.  I really don’t want to sound too self-righteous, but, ironically, overdramatizing these stories makes them less dramatic, less real.

I sincerely hope the best for Debbie Flores-Narvaez, the missing showgirl.  The terror and potential tragedy of these moments should not be lost on anyone.

And that’s precisely my point.  It does seem to be lost on us.  I am struck by (1) the perverseness of trying to report such a story in a thirty second segment.  How often, in such newscasts (and here I’m speaking of Headline News) do we lurch from the tragic to “on the lighter side?”  (2) Worse, however, is the histrionic tone of the Nancy Grace approach, made ickier by her sitting in front of a TV camera playing the role of Intrepid Crusader.

As I listened to the news segment yesterday morning and thought of how the story is being handled, for some reason the gladiatorial contests in ancient Rome came to mind.  For a fleeting moment, I imagined the spectators’ bloodlust as they watched the gruesome contests.  And then I thought, “That’s what TV does,” to stories like this one.  Especially “always on” cable TV.

So, we watch with morbid interest, feel passing pity and go grab a coffee.  I know there are both sociological and psychological explanations for this response.  But it still seems a lot like the Colosseum to me.