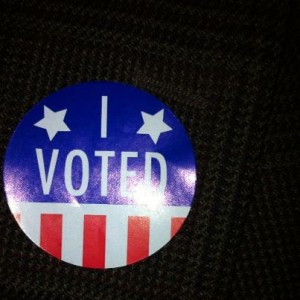 Off and on today, on this Election Day, I’ve been thinking about a chicken and egg question: do United Methodists lead or reflect?  Do we lead, or do we merely reflect the larger culture’s problems?  This is an impossible question to answer, but it is a desperately important one and, whether we can or not, we need to act in the direction of an answer.  Election Day makes me think about Christian witness.  And United Methodists.

So, let me try to pull a couple of ideas out of the mud that is my mind.  I firmly believe that Christians must exercise responsible citizenship in this world.  We are in the world, not of it.  That’s a nice-sounding phrase to many of us, but it is also true.  We are in the world, but not of it.  Exercising responsible citizenship is part of our bearing witness to the Gospel.  Christians are not supposed to stick their heads in the heavens and act as if things on this earth don’t matter.  I’m confident most people reading this blog will agree, but it still needs to be said.  But we’re also supposed to do more than reflect – than simply mimic the culture.

We lead.  We don’t reflect.  We don’t contribute to the hostility and bitterness.  Do we?

Sadly, we UMs generally do not lead.  We reflect.  Stick with me here as I make what make look like a left turn.  As an indicator of how far gone we seem to be, consider the recent barrage of comments on the Judicial Council’s decision to uphold security of appointment, striking down yet another of General Conference 2012’s actions.  According to a United Methodist Reporter article, one United Methodist bishop opined,

“A nine-member committee [the Judicial Council] has the ability to trump, if you please, what a whole thousand member delegation around the world believes, and what a four-year commission did with all its consulting.”

Is it possible that a bishop could demonstrate such a shocking degree of ignorance about how The United Methodist Church works?  Is this just happless frustration, ex post facto?

Consider this comparison.  College coaches who second-guess officials get severely reprimanded and NFL coaches get fined.  It is a cardinal sin for coaches to complain about officials.  Shouldn’t bishops embody at least this high a standard?  Bishops must lead, not reflect.

As bishops go, so goes the church.

We need to lead.  We need our leaders to lead.  Let’s let Election Day be the beginning.  Let’s start getting ready for after-the-elecction.  Let’s not engage in second-guessing and taking sides, however things turn out.  There likely will be some fall-out from the election.  We should not participate in second-guessing and name-calling.  Neither candidate is the Savior or the Devil.

We have a Gospel to share – 24/7.  (This does not mean something spiritual and not political.  It’s both.)  We have a witness to make.  Let’s measure our words and pray our thoughts before we speak them.  Let’s get out in front, not in a take charge way, but in a servant leadership way.