In this virtual world that is the Internet, physical location often seems increasingly irrelevant.  Today, however, on this day after Thanksgiving, 2011, my physical location is significant.  It offers a poignant context for my thoughts.

Greensburg was all but completely destroyed by a massive tornado in May, 2007.  The entire business district was leveled.  Every tree was completely denuded, with only trunks and major branches still standing.  About 2/3 to 3/4 of the entire town of roughly 1200 people blew away.  Among the buildings destroyed was the United Methodist Church.

About a month after the tornado, I had the awesome (and I do mean awesome, literally) privilege and challenge of preaching on the site where the church building was.  We met in a tent, on a corner of the property, using hymnbooks salvaged from the wreckage.  There were about 50 people there, as I now recall it.  Many of the church members were living elsewhere, since nearly everyone’s home had been destroyed, so the congregation was some diminished from what they generally knew.

What would I have to say to people who had lost all their material possessions?  One of the amazing facts about the tornado’s destructiveness is that so few people were injured and only one or two (again, going on faulty memory) died.  Any death is tragic, but given the magnitude of this tornado, it’s truly a wonder that not more perished.  Still, these dear folk were devastated.

Yes, so, what would I have to say that might be of help?  I didn’t have to worry.  What I said was largely irrelevant.  The people gathered in that tent were so thankful just to be together,  just to have community intact though buildings were gone; thankful that so few had lost their lives; thankful that God’s presence was and is ever near and especially so now as they worked on cleaning up and rebuilding.  I will never forget listening to them pray that day.

Now, four years later, I am, for just a moment, back in Greensburg.  I haven’t been here, I think, since moving to Texas and I am amazed at the changes.  There is a new hospital, a new complex of school buildings, a new downtown (it looks like what suburban folk might think of as a smallish shopping area in their neighborhood), and lots of new houses.  One still sees plenty of empty lots and naked foundations left over from the storm.  I know this town has suffered many difficulties in rebuilding, including being scammed by dishonest “builders.”  I cannot imagine all the challenges they have faced and I am confident there are more to come.

But here I am, in a town that is rebuilding.  I cry fairly easily, anyway, and when I pulled into town, I started.  It is inspiring.

By the way, here’s a photo of the United Methodist Church that now stands on the same spot as before. 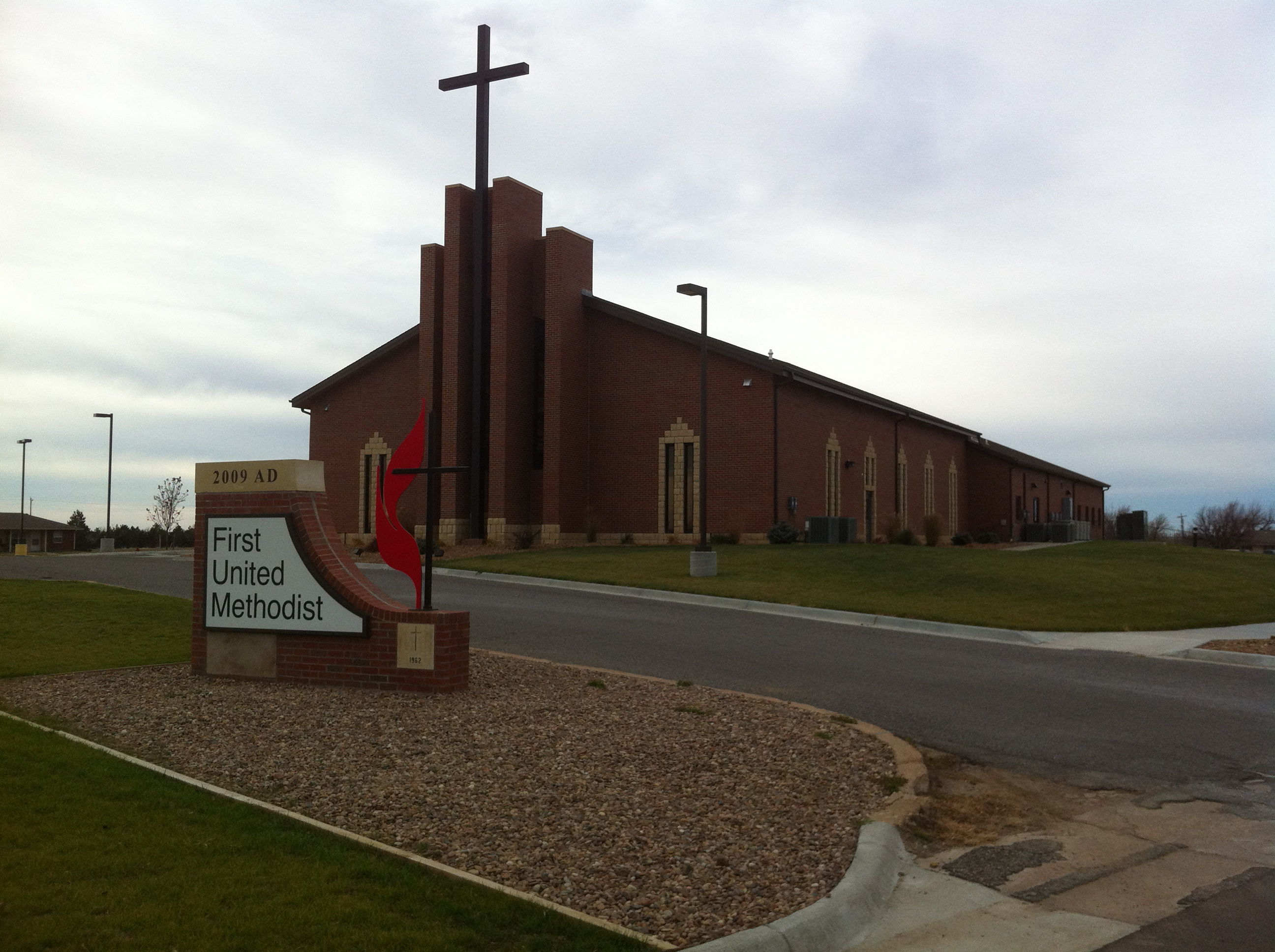 And now for what Greensburg teaches me.  I am deeply troubled by the gap between the biblical vision of the Christian life and the reality many of us (most?) experience.  I have recently published on this matter and I have much more to attempt. ( If you’re interested, go to (https://wipfandstock.com/store/Aiming_at_Maturity_The_Goal_of_the_Christian_Life).  I feel a parallel concern about church-related higher education, our UM colleges and universities.  I love the academy.  I love the church.  But I have some bones to pick and I’ve started picking them.  Stay tuned.

Today, though, sitting in Greensburg, KS, I ponder what this town teaches.  It does not matter how big the challenge is.  God’s grace is sufficient.  We can rebuild.  And we can rebuild better than what we were and had.  (Greensburg has received national attention because of its commitment to environmentally sustainable construction.)  We can change.

Yes, we can change.  And the world – at least those parts of it where we live and work – will be better for our trying.